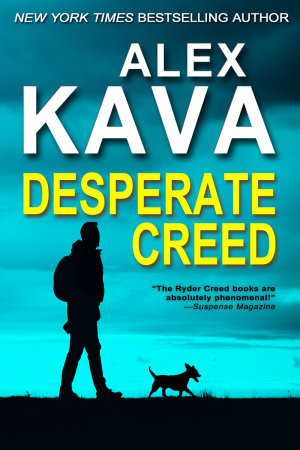 A TRAILBLAZER IN THE K-9 FICTION GENRE, Kava creates a “dynamic between Ryder and his canines that reveals a world rarely shared in fiction and perhaps nowhere presented more effectively than in this series.” —Phil Jason, Florida Weekly

Award-winning author, Alex Kava pulls readers into the middle of the storm and has them gasping for air even as they turn the next page.

I’m always looking for new and different situations for Creed and his scent dogs. This time Creed and Jason, along with Grace and Scout, are searching for survivors after deadly storms have devastated southern Alabama. The storms keep rolling in, threatening the handlers and the dogs as well as making it difficult to rescue those trapped in the debris.

In the meantime, Creed’s newly found sister, Brodie finds herself trying to recover from her own personal storm. How does a young woman adjust after being held captive for sixteen years? I know some of you wondered if LOST CREED would be the end of this series, but it’s simply a new beginning with all kinds of new challenges.

Oh, and did I mention Maggie O’Dell is trapped beneath the storm’s rubble? And one of the people trapped with her, maybe a killer.