Thank you for all the kind words about HIDDEN CREED.

In less than a week you managed to put the books on several bestseller lists.

It’s exciting to finally share it with you. I think it has a little bit of everything: murder, forensic puzzle pieces, lots of dogs and even a little romance. Hopefully, you’ll feel like you’re right there in Blackwater River State Forest along with the characters…listening to the forest creatures and sweating from the humidity, but maybe not smelling all the decomp.

If you’re still looking for the book, here’s the link of where it’s available. https://hiddencreed.alexkava.com

If you’re looking for a hardcover, please come to my website. We give you $2 off and free shipping in the USA (International use code POINT for $5 off retail))  and I sign and personalize each one. Learn more here: SHOP THE WEBSITE. (The audiobook will be released in September.)

If you enjoy HIDDEN CREED, please tell a reader friend! That really is the biggest compliment a reader can pay an author.

Now for some fun stuff! 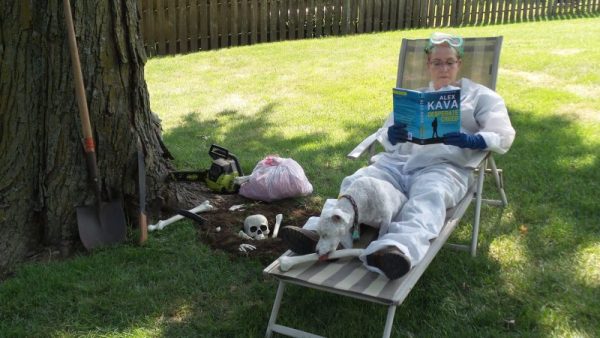 Last year the real Vickie Kammerer and her dog, Sugar, won my “Get Caught Reading Alex Kava Contest.” Grand prize was to appear as a character in the next Ryder Creed novel. We had over 150 wonderful photos submitted, but Vickie and Sugar went above and beyond with this one. I didn’t even want to know where they came up with the bones and skull.

When I started thinking about Vickie’s character, I immediately thought the photo screamed “medical examiner.” (Actually, it screamed “serial killer,” especially with that chain saw.) I was determined that Vickie Kammerer would become the M.E. for Florida’s District 1. Vickie was generous to provide some real life fodder for me to use, and I have to admit, I had the best time creating this character and including Sugar. Some of the chapters with Maggie and Vickie and Brodie are my absolute favorites. I hope you enjoy them, too. 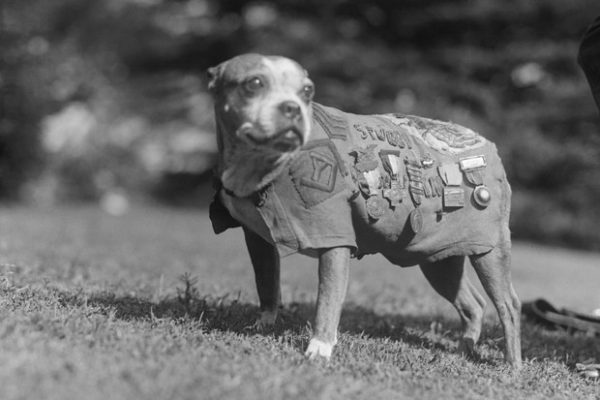 A lot of thought went into choosing Hank’s breed. He needed to be sturdy and muscular. You’ll understand why when you read HIDDEN CREED. During my research I stumbled on an article about this good natured and talented bull terrier named Sergeant Stubby. Before this, I knew nothing about bull terriers. I’ve never had one in my life nor have I ever known anyone with a bull terrier. But Stubby impressed me.

In 1917 a group of soldiers, members of the 102nd Infantry Regiment, noticed a stray hanging around while they trained on the grounds of Yale University. The dog had been living on the streets, scrounging for scraps, but he always showed up when they trained. A private named Robert Conroy started taking care of him and named him Stubby for his stature and tail. He even taught the dog how to raise his paw in salute.

When it came time for their unit to leave for France, Private Conroy couldn’t imagine leaving the dog behind. Keep in mind, during World War I the military hadn’t even started a military dog program. Conroy hid the dog on the ship, but it didn’t take long before the commanding officer discovered Stubby. The dog responded by saluting him, and the officer was reportedly speechless by the gesture. Stubby became the official mascot.

But that’s not all. Stubby’s ability to hear the whine of artillery shells before they landed proved to be life saving. He could locate wounded soldiers in no man’s land. And he could detect mustard gas before the attack, so the soldiers could put on their gas masks. Stubby even captured a German spy, grabbing the man by his breeches in the middle of the night and not letting go until help arrived.

Stubby served eighteen months, through four offensives and seventeen battles. The dog was given the unofficial rank of sergeant, a rank higher than his master, a custom that’s still used with military dogs. When he and Private Conroy returned home, Stubby became the sports mascot for Georgetown University while Conroy studied law then lived out the rest of his days with Conroy.

The story was so touching that I immediately started educating myself on bull terriers. And that’s how Hank became an American Staffordshire bull terrier and has become part of the Creed family. 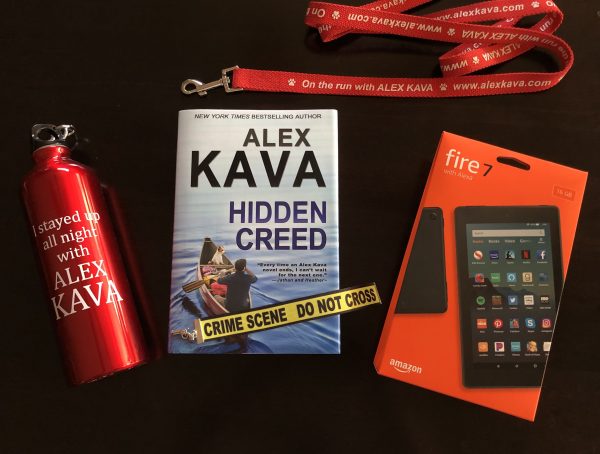 To celebrate the launch of HIDDEN CREED we have a special giveaway package. An autographed hardcover with our limited edition bookmark and a Kindle Fire. We’re also including a water bottle and dog leash because you need to take a break from reading and walk your dog. To enter, send an email to [email protected] and tell us what you like best about the Ryder Creed series.  We’ll announce the winner in the September Newsletter.

In the meantime {customer_name}, stay safe and healthy! And as always, thank you for reading my books.